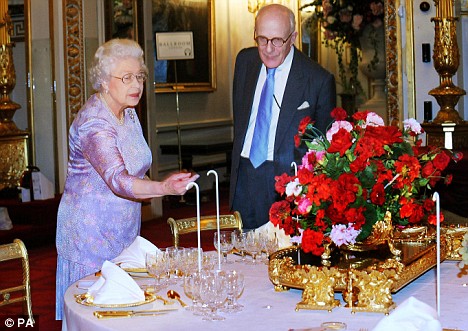 Although there is one post here on royal banquets, many have reached this site searching for information on the silver flatware used during a royal banquet.  Not all research has been completed but enough has been unearthed that a few salient facts are available.

As you can see by the following excerpt, more than just flatware comprises the Royal Grand Service:

The magnificent dining silver-gilt used at a State Banquet is from the Grand Service, originally made for George IV when Prince of Wales. It was first used to celebrate the 73rd birthday of his father, George III, in 1811.  As king, George IV continued to add to the service throughout his life, and by his death it included more than 4,000 pieces. Today the Grand Service forms the core of the royal silver and encompasses the best examples of 19th-century design, drawing on Egyptian, Greek, Roman and medieval sources.  The dining plate is dominated by the monumental Mercury and Bacchus and Apples of the Hesperides candelabra, which stand over a metre tall.  Made by the master goldsmith Paul Storr and designed by the sculptor  John  Flaxman,  they  are  always  placed  on  the  table  opposite Her Majesty The Queen and the visiting Head of State. [royalcollection.org]

It is meant to overwhelm.  Looking at the flatware, it is given over to what is called fiddle, thread and shell patterns.  It is best illustrated if we look at the silver flatware “Kings Pattern” that Tiffany produced around the turn of the century and that was wildly popular.  It incorporates many of the decorative details of the above flatware and follows the development of these patterns through the Edwardian Era.  Replicas were found in every hotel in America.

As time permits, more research will be done on this.  Meanwhile, it is hoped that many of your questions have been answered here.  If not, leave your question in a comment.

Welcome to “At Grandma’s Table”

Delivery! To your Reader